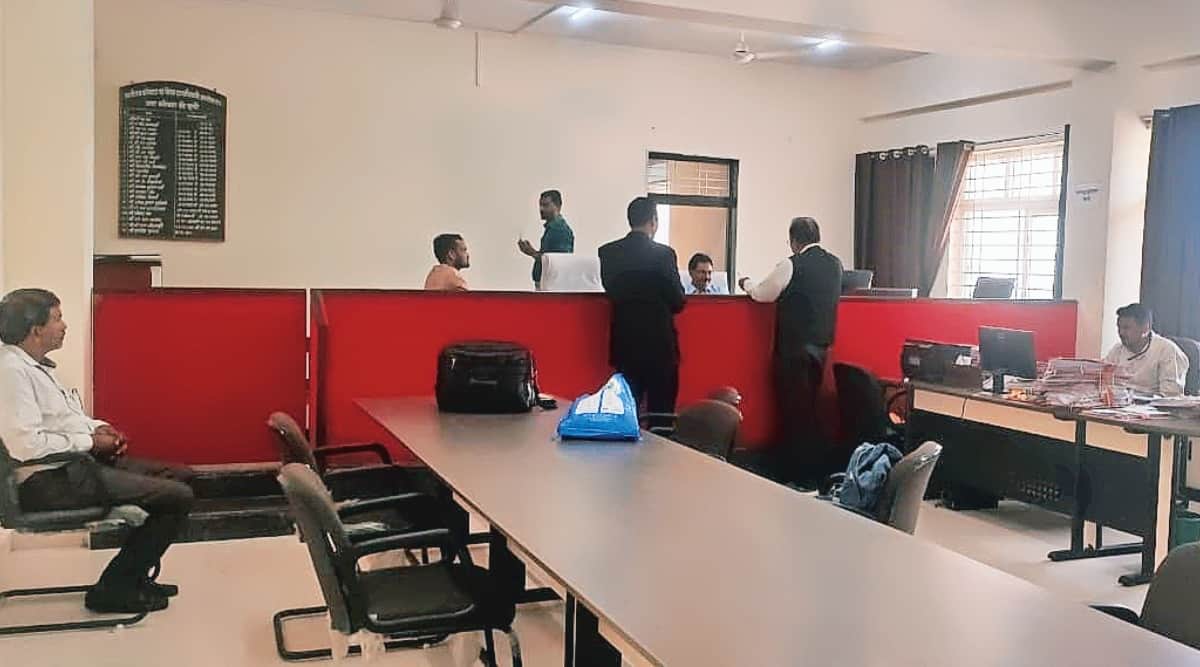 In her one-room home in Anand Nagar in Khargone, Surajbai Gangle, 70, recounts the night of April 10 when she “barely slept” as communal clashes over a Ram Navmi procession ripped through the city. Finally, she says, she got up from her bed and saw two teenagers standing outside her house.

“I asked them what they were doing and the boys asked me to go in and said I might get hurt from stone pelting… I thought they were my grandsons. But my daughter-in-law Sunita later told me that they were children of our Muslim neighbours, Kalu Khan and Jabir Khan. She had seen them from behind when they were leaving and recognized them,” she says.

Minutes later, three houses of the Gangles – that of Surajbai, that of her son Subhash and grandson Vickey – were attacked during the riot that spilled over to their place.

This became the basis of separate claims, totaling Rs 13.2 lakh, filed by Surajbai, her son Subhash and grandson Vickey in the Khargone claims tribunal – the first under the Madhya Pradesh Prevention and Recovery of Damages to Public and Private Property Act to come entered into force in January of this year.

While Surajbai’s son Subhash, who works in the fire service, has made a claim of Rs 4.80 lakh by accusing nine people of the Khan family, her grandson Vickey, who works as a driver, has made claims totaling Rs 5, 5 lakh by indicting nine members of the family. Khan family. The Khans live about 250 meters from the Gangles.

But it is Surajbai’s claim that has attracted attention – she has made claims of Rs 2.90 lakh, accusing eight people of looting her home, including Kalu Khan and his 12-year-old son.

The 34 claim cases, including those of the Gangles, which have been heard by a Khargone tribunal set up to recover damages after the April 10 communal clash, offer a glimpse into the workings of the special court — defined by summary judgment and the lack of a criminal investigation process to establish guilt.

So far, the tribunal has issued formal notices to 270 accused and issued injunctions in six of the 34 cases.

Ravindra Chhabra, a senior lawyer working at the Madhya Pradesh High Court, points out the gaps in the law that allows minors to be tried for a civil offense when, according to the IPC, they can only be tried by a youth council. while a minor may be tried under the Code of Civil Procedure and a notice may be given in the child’s name, “after the notice is issued, once it is determined that the accused is a minor, a guardian or special for the purpose of the trial”.

However, Shivkumar Mishra, the retired district court presiding over the two-member court, said: “During the filing of the claim, the claimant cannot be required to specify the age of the accused, as it is not always possible to look at a person and be determine age.”

Sajid Pathan, who represented the accused in the tribunal, points to another “loophole” – while the FIR filed by Surajbai in the aftermath of the riots does not mention Kalu or his son, as she filed before the tribunal, Surajbai said that she had seen the two, among others, ransacked her house.

After the 12-year-old was given a recovery notice of Rs 2.90 lakh based on Surajbai’s request, Kalu moved the Indore High Court to remove his son’s name from the proceedings of the tribunal. However, the Supreme Court rejected their plea.

In their one-room house, Kalu’s wife, Ranu, says that when the police came to hand over messages to her relatives, they were accompanied by Surajbai’s daughter-in-law Sunita. “I told Sunita that my son and husband have nothing to do with the riots. She then said to me, ‘Give us the names of those who did it and we’ll drop their names’.

The other cases in the tribunal

One of the cases where the tribunal has issued orders is where it awarded Rs 50,000 for a burn injury to Sawant Mukesh, a resident of Anand Nagar in Khargone.

Mukesh had demanded compensation of Rs 1 lakh while accusing his neighbors Iqbal and Nisar of attacking him. He also demanded Rs 10,000 for damage allegedly caused to two doors in his home.

Lawyer Rajesh Joshi, who defended Iqbal and Nisar in the tribunal, said: “The Claims Tribunal has been established to decide damages for civil matters and in particular damage to personal or public property and not for personal injury. An injury is a criminal case that should be heard in a hearing court and not in a claims court.”

In the case of another applicant, Mukhtiyar Khan, the court had to drop the case against three of the 16 people he accused of damaging his home because they “didn’t exist”.

Lawyer Sudheer Kulkarni, who disputes Mukhtiyar’s claim, held the court responsible for sending messages to people who did not exist. “It’s laughable, but the court doesn’t have the resources to examine the claims before they are accepted.”

“All the cases related to the riots are now coming to the trial judge and are far from reaching a conclusion, but at the same time the tribunal decides on the case within three months, how are they equipped to do that?” said Rajendra Joshi, who is defending some Muslims accused in the tribunal.