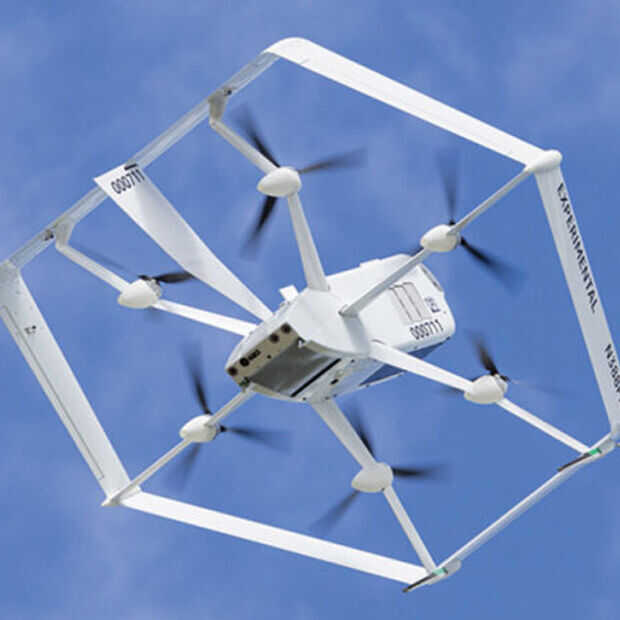 You know it from the American movie, the newspaper delivery man who rides up on his bicycle and throws a newspaper at the newly awakened, bathrobe-clad resident of the house. It always goes wrong in comedy: someone gets hit in the head or the dog runs off with the newspaper. Are we going to get that exercise with Amazon’s new drone?

Amazon has unveiled the new MK27-2 drone: a fairly large device that’s a bit sturdier than previous drones that Amazon intended to use for parcel deliveries. Because it works a little differently: it drops your package off at your house instead of driving yourself through all kinds of crazy curves to get to your door. That should save a lot of crashes. Packages do not fall from a height of 10 meters, but from a height of 3.5 meters.

Prime Air Drones Can’t Carry Large Orders: If your package weighs more than 2.5 kilograms, it’s not eligible for delivery with a drone. In any case, you don’t qualify for that in the Netherlands: our country isn’t very suitable for drones anyway due to its dense population, Amazon is only testing its drones in America, where it has a much larger support base anyway.

Amazon in the Netherlands

In the Netherlands we were officially exposed to Amazon a few years ago, as it came to our country at that time. Although we have been able to import packages from the American Amazon – often at a slightly higher cost. It all started with ebooks, but now a fairly complete Amazon store has settled in our country and we’ve been able to benefit from it for years, including the Amazon Prime days.

Amazon will initially test its new star on the horizon in California. In Lockford, people can still expect a package this year that will be dropped in the garden by drone. A test of the flying devices is also underway in College Station, Texas. The drones are fully electric, but Amazon already knows there has to be a new variant. Because the MK27-2 is not very suitable in all weather conditions. If it’s damp, the drone will have problems (and of course it can still crash, which must be avoided at all costs).

The new one is already here: MK30. This drone is a bit smaller and can fly farther. We know in the Netherlands it can’t handle a heavy downpour, but a light drizzle is no problem for this form. In any case, it is considerably more attractive than its predecessor, because it makes less noise. This is still a big problem with drones: the buzz when they fly is very annoying.

Although it is nice that as a person you can hear a drone and know that you might be filmed, as the buzzing is very disturbing for animals, for example, and also for humans if it wakes them up, for example. Noise will be 25 percent lower with the MK30. The plan is to deliver packages to customers within 30 minutes with MK30. Speed ​​deliveries like Gorillaz may warrant caution, although we don’t expect drones to make their presence felt in the Netherlands any time soon.