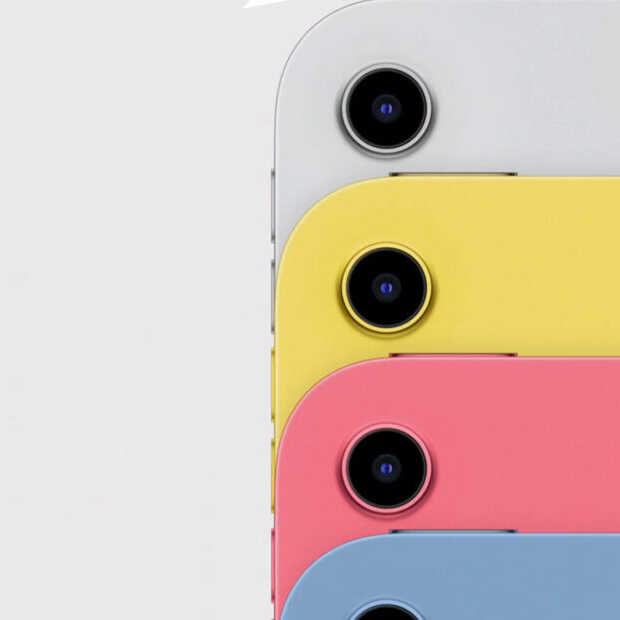 A first for the new iPad: Apple has removed the home button. This means that you no longer have a physical button on the screen, which has a positive effect on screen size. The new tablet measures 10.9 inches. And there’s more: Instead of a Lightning port, you can charge this iPad with a much more USB-C.

The new iPad comes in four colors: pink, blue, silver and yellow. The screen is a 10.9-inch Liquid Retina with a resolution of 2360 x 1640 pixels (4 million pixels with a brightness of 500 nits). If you want to log in with Apple TouchID, you can still do so, but it has been moved to the on/off button at the top of the gadget. The 12-megapixel selfie camera has also been given a new position: it is no longer on the horizontal axis, but on the vertical axis. This is not without reason: Apple wants the iPad to increasingly take on the role of a laptop.

That selfie camera is there to make sure you measure the video correctly: thanks to the software, you’re always being followed and you’re in the middle of the image. The camera can also take ultra-widescreen photos. If you like shooting videos, you should opt for the 12-megapixel sensor on the back, as it can shoot 4K (plus 240fps slow-motion video) videos. The device’s battery lasts a day and is charged through that USB-C port.

Significantly enough, the new tablet doesn’t have an iPad chip inside, but the iPhone 12 does. However, according to Apple, the A14 Bionic makes the tablet three times faster than previous iPads. Thanks to iOS 16, the iPad can be used with the Apple Pencil stylus that appeared a few years ago. However, a new Magic Keyboard Folio keyboard cover has been developed that allows you to completely turn the iPad into a laptop of sorts. There are two variants of this iPad with and without a SIM card slot for mobile coverage.

Without a SIM card slot and with 64 GB of memory (the simplest variant) is available from October 26 at a suggested retail price of 589 euros. If you want to use a SIM card, you’re looking at 789 euros. The 256GB model costs 789 euros, although it is much more with a SIM card: 989 euros.

It didn’t stop with a regular iPad, Apple is also bringing out a new iPad Pro. Its specifications are much less exciting, as it looks exactly like its predecessor except for the chip and screen. The M2 chip will make the device significantly faster and the screen (available in 11-inch and 12.9-inch) should have a smoother scrolling experience thanks to better black levels and a 120 Hz refresh rate. The iPad Pro is available from 128 GB of storage with 8 GB of RAM and costs 1069 euros for the most common variant.

Apple has finally announced a new Apple TV. Apple TV 4K is cheaper than the previous variant and offers more storage. For this you have to give up something, like the Ethernet port. This means you can only use the streaming box over WiFi. The most affordable version has 64GB of storage and lacks the Lightning port, but does have a USB-C port. The processor is an A15 Bionic, known from the iPhone 13. The case is also slightly smaller: 9.3 x 9.3 cm instead of 9.8 x 9.8 cm. The new Apple TV 4K is available from the beginning of November and costs 169 euros.