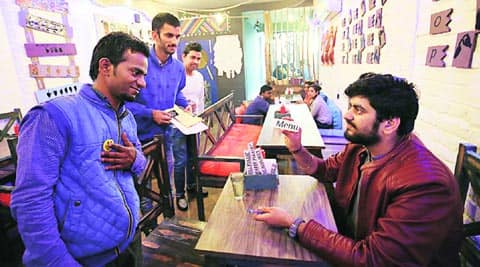 In the far corner of the bustling Satyaniketan Market is Echoes – a small, nondescript cafe. It is set amongst the many new eateries that have recently opened a shop. It’s not just any neighborhood restaurant, though; it is run by staff who are deaf and dumb.

“There are a few quick-service restaurants that employ workers with different disabilities, but traditional restaurants with more extensive menus don’t employ them, especially in jobs that require customer interaction. We believe that, like anything else, serving customers is a skill that can be learned. However, serving them well is something that has to come from the heart,” said Kshitij Behl, 22, one of the cafe’s owners.

Echoes, themed “motivation,” is the brainchild of five friends, all in their twenties. “Everyone sells the same food for the same price in the same area. It all sounded boring. We wanted a challenge, we wanted to serve good food, but we also wanted to start something with heart. Everything just fitted together in the end,” said Shivansh Kanwar, 22, who manages the service operations at the restaurant.

The owners have devised a clever process to minimize errors. “Listen with your eyes, talk with your hands, that’s the mantra for everyone in the cafe,” Kanwar says. When you put a switch on your table, a lamp lights up, warning a server that it is needed at a table. The cafe has a specialized menu with individual codes for over 150 dishes. “We give the customer the menu, a notepad and a pen. He can write the code for the dish he wants and the way he wants it, tear the skin and give it to the server,” says Behl.

Cue cards on each table read ‘Water please’, ‘Bill please’ and ‘Call the manager’, making communication with staff efficient. With the full sign language featured prominently on the cafe’s wall, the more enterprising people can even try talking to the staff.

Launched just a fortnight ago, Echoes serves the regular fare of pizza, pasta, wraps, and sandwiches at bargain prices, but the experimental can opt for dishes like waffliza (waffle-based pizza), the pink pasta, mac n cheese chops (deconstructed macaroni and cheese) and Hyderabadi style penne. The sangria without wine is another crowd pleaser.