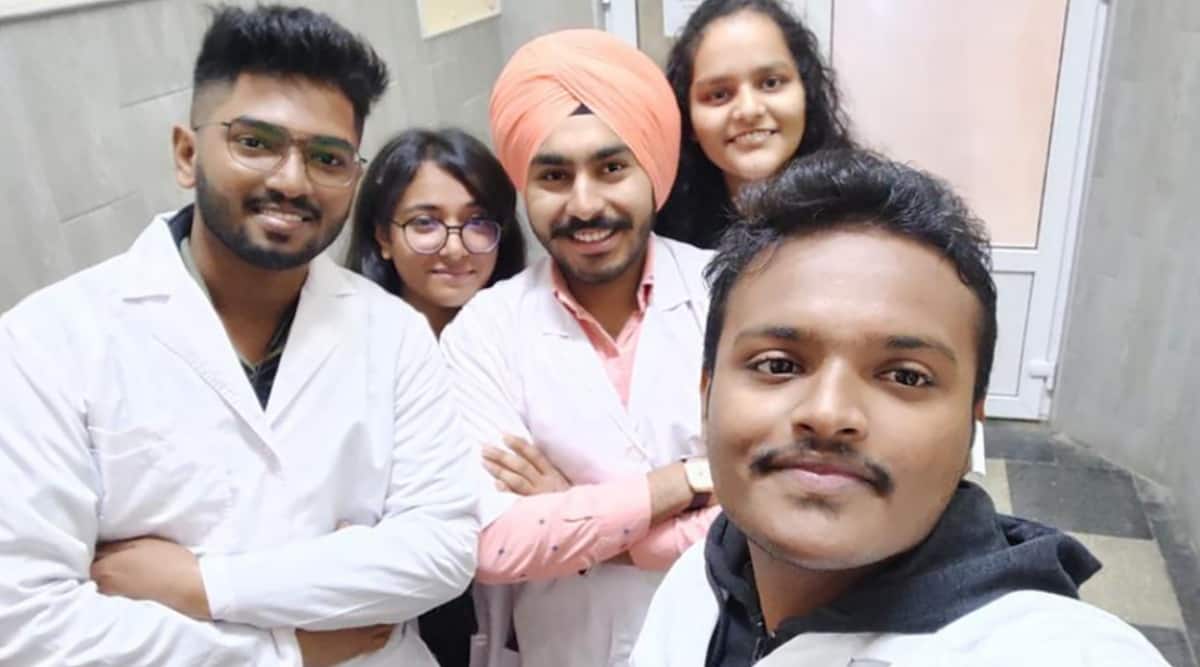 They wanted to be doctors, surgeons and super specialists. They had dreamed of saving lives, sitting in air-conditioned cabins and hanging their diplomas on the wall. There is now very little left of these dreams and hopes.

The war in Ukraine, now entering its eighth month, not only forced Indian students studying medicine there to return home, but also broke their careers, leaving some students struggling with a pile of debt and the frustration of having to settle for less prestigious courses such as nursing.

The Sunday Express spoke to four sophomores from Bukovinian State Medical University in Chernivtsi, western Ukraine, who said they felt helpless after returning from Ukraine and needed to switch powers and enroll in courses such as BSc, BBA and nurse.

Anand A, from Kollam, Kerala, was in his second year at Bukovinian State Medical University when war broke out, forcing him to flee the country with other Indian students. Anand had taken out a student loan of Rs 15 lakh, which was intended to cover six-year tuition fees in Ukraine.

“When I got to the university, I was asked to enroll for the semester starting in December 2020, but my flight was canceled and I arrived three days late. They refused to let me in and told me to join the next semester. It was not possible to return home so I paid Rs 1.5 lakh extra for a basic course. By the time I returned to India, I had spent Rs 3 lakh from my bank loan and Rs 5-6 lakh from my parents’ savings on flights, food, lodging, etc,” Anand said.

In the last week of February, when war broke out between Ukraine and Russia, thousands of Indian students attending medical colleges there were evacuated to India. While freshmen and sophomores were advised to reapply for NEET – the pre-medical test for students aspiring to a career in medicine – and take new admissions, while seniors were allowed to continue with online classes. However, these students were later told that they could only continue taking online classes for theoretical courses, not practical work, meaning they had to return to Ukraine or be transferred to another country to continue medical studies.

“I was in a dilemma because my family didn’t have the money to send me to another country,” Anand said.

Anand’s father is retired and the only family member who earns money is his mother, a cancer patient, who works as a nurse in Saudi Arabia to fund her son’s education.

“I had to take out a mortgage on my mother’s gold to take out the bank loan. I asked about another loan to study abroad, but the bank seemed reluctant because the amount borrowed was much higher than what I had borrowed to study in Ukraine,” he said.

Anand has now enrolled in a nursing school in Bengaluru and hopes to find work abroad.

“It was not easy for me. I’m 21. I would have to repeat the second year and the medical training is long. We also have to pass extra exams to be allowed to practice in India. I don’t want my mother to work that long. She depends on drugs to survive. Although she wanted to see me as a doctor and not a nurse, I had no choice,” he said.

Like Anand, his classmate Melvin Shaji Jose, who hails from Changanassery Municipality in Kottayam District of Kerala, has also decided to enroll in a graduate degree in Nursing, despite earning NEET and qualifying for a place in Dentistry. .

“I wanted to be a doctor and treat sick people. I don’t see myself brushing teeth and doing root canals,” he said.

Before choosing to go to Ukraine, Melvin had twice approved the NEET, but with a score of 450, he was only eligible for admission to the honorable private medical colleges where the cost of education is much higher than the cost charged by universities in Ukraine will be charged.

Melvin said he had done a lot of research before deciding to pursue medical studies in Ukraine, adding: “I was eligible for a esteemed university in India, but the fee was Rs 14 lakh per year. My full education costs, together with tickets, food and lodging, would have amounted to Rs 30 lakh in Ukraine.”

“Their education level is also good. But by the time I got back, my family had spent about Rs 9 lakh which includes visa and ticket fees, education fees, etc. Although students from my group went to other countries, I didn’t choose it because of the quality of education there is very low. When I checked the website of the National Medical Council (of India), there was not a single student from these countries in the last six years who had cleared the FMGE entrance, which is mandatory for foreign medical graduates before practicing here,” said Melvin.

Santosh Yadav, who hails from Himmat Nagar in Nanded, kept hoping until last month, when he finally gave up and enrolled in a BSc course.

Santosh, whose parents are farmers, was trapped in Ukraine in hopes of evacuation after the war broke out. He is now struggling to repay the loan he took out for his studies in Ukraine.

“It’s not just about tuition. We paid for flights, visas, local lodging, food, personal expenses, including extra expenses due to the war. The banks are not ready to waive it,” he said. Santosh has chosen not to return to Ukraine, even though the war ends and the situation improves.

“If I decide to return to Ukraine today, what is the guarantee that the situation will not worsen? The Indian government could then say that we had warned the students. I can’t take this risk. My family has no money left. I also don’t have a family business to fall back on if my degree doesn’t work out. I need a job to survive so I decided to let go of my dream of becoming a doctor and did the BSc degree. It’s okay, not all dreams come true,” he said.

For Satnam Singh, 20, the choice was to either return to Ukraine or enroll in a course in India fraught with risks and challenges.

Satnam, a resident of Patiala’s Marori village and the only child in his family, recalls the trauma his mother endured while trapped in the war zone.

“In Chernivtsi in Ukraine, to support myself, I worked in a restaurant after taking classes. When the war broke out, buses full of medical students arrived from Ternopil who claimed to have not eaten for two days. The restaurant owner, who was a Punjabi, told me to do ‘seva’. I used to cook 10 kg of rice and dal for the students every day. A few days later, someone from my village called that my mother was so worried about me that she hadn’t eaten in days. Then I decided to go back and became one of the last 50 students to be evacuated from my university. My mother is so afraid of losing me that she will not allow me to return to Ukraine,” he said.

Satnam said his father, a farmer, had taken out a loan for his crops from private lenders to fund his education.

“My family has been very supportive of me. I studied at a government school in my village up to grade 10 where no English was taught. At university in Patiala, where my parents sent me to study science, I was ashamed of students who spoke fluent English. So my father hired an English teacher. Later I took the NEET exam twice but scored less. My parents risked everything and chose to send me abroad to study medicine because they knew it was my dream. Now, for their sake, I must make strong decisions. I have decided to take a ‘recreational guidance’ course in Canada. I have relatives in Canada who will help me. Becoming a doctor is my dream, but I also have to be pragmatic. Between MBBS and life, I chose life,” said Satnam.