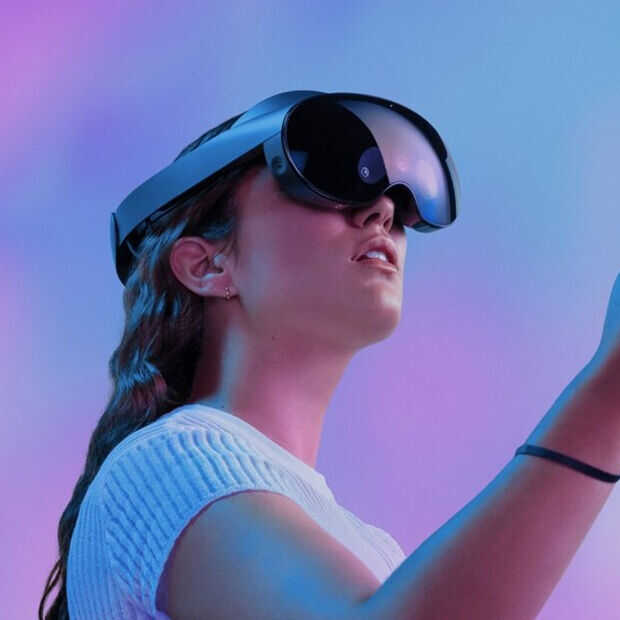 Meta Quest Pro Official. Meta has shown off completely new design VR glasses and the price and release date are known. The device is said to be half as powerful as the popular virtual reality glasses Meta Quest 2.

The biggest difference between Meta Quest 2 and Meta Quest Pro is that the new goggles have augmented reality options. That means you can still see the real world in full color through your glasses, thanks to the front-facing camera. So you don’t see the world directly, but you actually see it when you use your smartphone camera and not in black and white as we can see in previous VR glasses. The nice thing about this is you can still display virtual objects on the glasses, but they appear to be in the real world.

There’s also a camera on the inside of the headset to see what you’re looking at. As a result, a technique is applied to make what you see appear sharper Parts you don’t see can appear less sharp, because you won’t be distracted Why choose this meta? This can ensure that the chip that has to do all this processing is not overloaded. The chip has also been vastly improved: it’s 50 percent more powerful than the Snapdragon XR2 Plus chip. The specs include twice as much RAM as the Quest 2: 12GB (with 256GB of storage memory).

But there is another reason, which has more to do with the metaverse. As we all walk through Horizon Worlds, Meta wants to read your emotions from your eyes and thus make your avatar show more emotions. Consider raising your eyebrows, but smile and wink. The controllers are also different, fully matching the new design of the glasses. It also has cameras, so hopefully items falling out of cupboards are a thing of the past. They are slightly smaller and can also be charged in a charging dock (just like glasses). This saves buying AA batteries again.

The Quest Pro has two LCD screens of 1800 x 1920 pixels per eye. Because the screens will have 75 percent more contrast, they still offer a different viewing experience than the Quest 2 (which has an 1800 x 1920 pixel LCD screen per eye). The glasses have fewer lenses, making them a little less dense on the head. So it’s like regular glasses instead of ski goggles. Surprisingly, this is not equally positive in all cases, as it allows more light to enter. However, if you find it annoying, you can buy a separate gadget for it. For 50 euros you get a ring that can block light. An odd choice: Meta makes VR glasses that aren’t perfect, but they provide a solution that costs money.

There are a few things Meta was keen to improve with this new virtual reality headset. For example, thanks to the large headrest at the back, it should be a somewhat comfortable process to put on and take off the glasses. The fact that the glasses have a battery on the back should help make for a more comfortable wearing experience. It has to be, because it’s a heavy thing at 722 grams. The Quest 2 was already not the lightest at 503 grams. That’s partly because of the headband, but you can also buy an upgrade for it: the Elite Strap, which shaves off less than 50 grams.

It all sounds pretty good, but the price tag doesn’t lie. While the Meta Quest 2 is around 500 euros (and even recently increased in price), the Quest Pro is no less than 1799.99 euros. You get two controllers, a charging dock and a protective cover. The device will be available soon: from October 25.