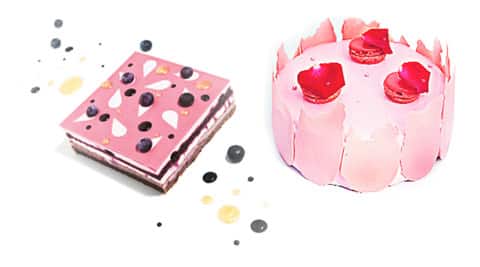 Owner of Mumbai-based French patisserie Le15, Pooja Dhingra’s Instagram showcases her latest creation – the cherry blossom macaron. Inspired by her recent trip to Japan, where she saw sakuras blooming in Tokyo, Dhingra returned home bursting with ideas. “I took dried cherry blossom flowers and tea and steeped it in ganache to make the macarons,” says Dhingra, who has previously experimented with dried rose petals, marigold, and dried lavender from France for her popular macarons.

At Yuuka at the Palladium Hotel in Mumbai, Boston-based chef Ting Yen’s Japanese restaurant, fried sakura flowers are used atop the Tofu carpaccio, a dish that highlights the delicate nature of Japanese cuisine. For the dish, Sakura flowers are covered in panko crumbs before being deep-fried in hot oil. “The oil should be hot, but not too hot. The secret is in light hands,” Yen said in an email from Boston.

Although it’s a small part of the dish, what makes him go to extremes? It should have the right crunch while still retaining the flavors of this delicate flour. “Edible flowers have a distinct flavor, and no matter how flat the dinner palate is, the fact is that it really makes a difference,” he says.

Yen uses a blend of flowers such as fragrant marigold, spicy calendula, sweet viola and peppery nasturtium for his signature creations such as Salmon on Fire and Salmon Truffle.

More and more restaurants are paying attention to plating and flavor profiles, and chefs are taking a special interest in this trend — from growing flower beds to even foraging. With Delhi’s urban sprawl, chefs have more room to play with ingredients. When Dramz chef Pankaj Sharma says he likes to use local ingredients, he’s referring to what he grows in his own backyard. The lawns outside the spacious whiskey bar in Mehrauli are dotted with seasonal flowers and microgreens, all of which make their way onto his plate. Visiting the garden with Sharma will have him proudly pointing out seemingly harmless shrubs and instructing you to pick and taste a leaf or bud. Onion flowers? Yes please.

Around the corner is Sujan S at Olive Bar and Kitchen. In addition to overseeing his restaurant’s celebrated Mediterranean cuisine, on Thursdays Sujan holds The Tasting Lab at the adjacent Greenhouse on The Ridge, a multi-course curated dining experience, blending science, nature, and food in an uncontrolled way. Your scallops come with nasturtiums and fermented garlic, while a salad has 30 components, herbaceous and more.

A light touch of essence or infusion in a dessert, or a syrup or floral liqueur for artisan cocktails can give it an edgy accent. For example, at Goa’s A Riverie, a quirky restaurant in Calangute, essential oil is made from the finest Bulgarian rose petals infused with brut champagne cocktail. Priced at $20,000 for a kilo (about Rs 13 lakh), it is the most expensive ingredient used in the restaurant.

Not to be outdone, Delhi’s bars also play in their gardens. Social, in Hauz Khas Village, has cocktails with frozen chamomile leaves mixed with whiskey and cranberries and served with the flour; as well as schizophrenic, an infusion of vodka, edible lily essence, lavender and the flower itself. At The Hungry Monkey, the intoxicating elderflower syrup is used in a tequila-based cocktail that tastes like summer. At La Folie in Mumbai, fresh damask roses – a rare variety with a soft fragrance – are used to make an infusion for the damask desserts.

Likewise, violets from the French region of Toulouse are used in the popular L’enviolet dessert. As the trend picks up in India, chefs are open to experimenting with flowers of Indian origin, such as jasmine, marigold, and hibiscus. “You have to pair them correctly with the base, though. Marigold can work with a carrot cake, for example, if it has a nice orange and marigold compote, but will it go well with a chocolate-based dessert?” asks Chef Sanjana Patel from La foil.

Banana Flowers: These intoxicating flowers are mainly used in Bengali and South Indian cuisine. Known as vazhaipoo in Tamil, these are used in fried vadas or stir-fried with coconut. Mocha (banana blossom) is a spicy dish in Bengali cuisine.

Pumpkin Flowers: In Bengali food, pumpkin flowers and buds are fried in batter and eaten as snacks, while South Indians make it a stir-fry dish, with lots of coconut.

Rose Petals: Who hasn’t had a gulkand milkshake or rose water or petals in their dessert?

With input from Shantanu David