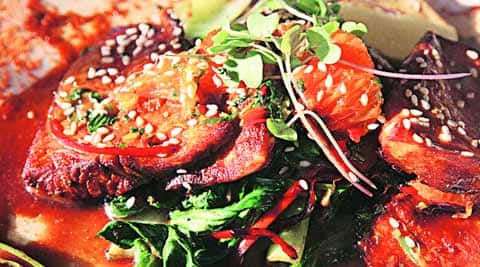 The restaurant business in Delhi is very similar to the ancient dynasties of China, before the nation was ruled by commissions. From Ming to Sung, each era left an indelible, clear impression on his hometown. Likewise, in Meherchand Market, after passing the formidable Chez Nini earlier this year, it’s time for another restaurant to take over. Competing for the laurels is Diva Spiced, who recently moved into the same spot.

Considering it’s under the auspices of Ritu Dalmia, Diva Spiced is eclectic to say the least, be it the space, the music, or the menu. For the sake of brevity, we will focus on the latter. Asian in conviction but with a global execution (taro spiced burgers, come on) the food is not lost in translation, with all due respect to Ms Coppola.

We start prosaically, with a Crystal Dumpling basket with more variants than a racial-quality promotional ad. While the concept may be dated, the flavors are anything but. The slow roasted pumpkin and water chestnut is crunchy while the Shrimp and Japanese Ginger have a little more bite than the average Kitana. Our favorite is the wild mushroom, which is so fragrant/pungent that it was recently snorted by a prized truffle pig.

Our main course consists of the Udon Noodles and Spiced Pork Ribs. The noodles, served in a stone bowl and topped with your choice of veggies and protein, are everything those past ads (you remember them, all those noodle ads) promised but never delivered.

Soup with a resounding slurp, infused with flavor every millimeter, yet a filler rather than a filling; the universe has finally delivered what the TV promised. Then there are the ribs. Without falling into superlatives, let’s just say that the spare ribs are An Experience. And the kidney bean puree that comes with it, which will instantly transport you back to the comfort food days of rajma. It’s inspired.

For dessert, we have a Salted Caramel Tart that could put entire advertising campaigns of famous chocolate brands to shame. Satiety has never been a bon mot.