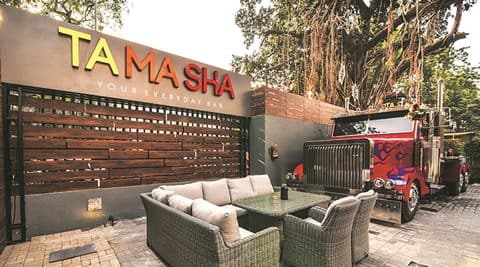 Tamasha is enviably situated on private property on Kasturba Gandhi Marg, just off Connaught Place, avoiding the resulting traffic jams with a valet service, a must on the busy road. Spread over two floors, with cavernous interiors, it is nevertheless the front garden that makes Tamasha worth seeing. Featuring a brick marked at an angle dominated by a truck – rather the truck from the Transformers franchise – and another truck that acts as a bar. A tree looms large over the courtyard and, covered in a constellation of Christmas lights, sets a beautiful scene at night. The interiors are minimal, bound in stone and wood, with sofas, a second immense bar and electronic music filling the entire space.

The menu is largely made up of contemporary Indian and Indian fusion that is all the rage these days, split into small and large plates. It is complemented by the quasi cuisine of Delhi eateries and enhanced with a large bar menu; the ubiquitous sheesha list is olfactory clear.

We decide to be cool and go with the crowd, sticking to the fusion fare. So accordingly we start with the Calamari Chaat Salad and the Beer Batter Amritsari Fish Steak; and the Tasty Tamasha Tasty Coin for a bonus round in these hunger games. The coins actually consist of mushroom galouti sandwiched between a croissant with the galouti spiced with yam or ole, giving it an exotic tartness, delicious if you like a bit of strong food, which we do.

The salad is a bit heavier than the word suggests, due to the crust of the calamari. While the calamari was adorned with springy lettuce, basil, olives, pickled onions, crisp potatoes, peppers, and pickled cucumber, all tossed in a tamarind vinaigrette, the calamari could have taken less. However, it’s the fish that swims away with the honor – fresh, flaky tongue wrapped in a tangy, crunchy carmine batter, served with a lemon-mint foam (more like a cream) that gives the mini steaks a burst of freshness.

After the relatively healthy fare, we decide to get started with the Baked Butter Chicken Pasta and the Bhuna Gosht Sliders. The sliders are simplistic in presentation, even if the dried meat filling in the mini buns is complex in spices. The pasta is a gooey melange of soft penne mixed with butter chicken with gravy, a combination that is becoming increasingly popular these days, for obvious reasons. Since the dessert menu is quite limited at the moment, we decide to dive in next time. It should make quite a splash.